Ryan Hansford has prevailed in a wild day of racing in the Gulf Western Oil Touring Car Masters at Sydney Motorsport Park, sweeping to victory in the first race of the weekend after a wild battle with teammate Ryal Harris.

Later in the day, Jim Pollicina held out John Bowe and Adam Bressington in a three-way battle for the lead in the Trophy Race to record his first win in the category.

Hansford’s race one victory was his second of the season but wasn’t won without a massive fight for the lead.

Starting from pole, the Queenslander dropped to third on the opening lap as Steven Johnson and Ryal Harris swept through into first and second positions.

Harris then passed Johnson for the top spot a lap later, Hansford sweeping past the three-time champion on lap three to set out in pursuit of his teammate’s EFS Camaro.

With Johnson watching from behind in close company, Harris and Hansford battled for the lead for the second time in as many rounds with the simmering fight boiling over on the sixth lap as the pair bumped while side-by-side at turn two.

The contact punctured one of Harris’ wheels and forced the Camaro to pit lane; the Bathurst winner ultimately finishing 16th and one lap down.

Hansford eased away from Johnson to take his second win of the year, while Jamie Tilley starred with his first outright podium finish in third.

The second-generation racer from Sydney – the son of TCM legend Brad – had qualified fourth but slipped to fifth in the opening laps.

In the midst of a massive fight between John Bowe, Adam Bressington, Marcus Zukanovic, Cameron Tilley and Jim Pollicina, Tilley worked his way through the pack with his Ford Mustang and claimed third when Harris pitted.

Bressington stormed from outside the top-10 to fifth, while Tilley, Pollicina, Karanfilovski, Mason and McLeod completed the top-10.

The race saw early drama when Jeremy Gray and Pollicina made contact exiting turn five on the opening lap, the incident spinning the Capri Perana to the outside wall and out of the race. 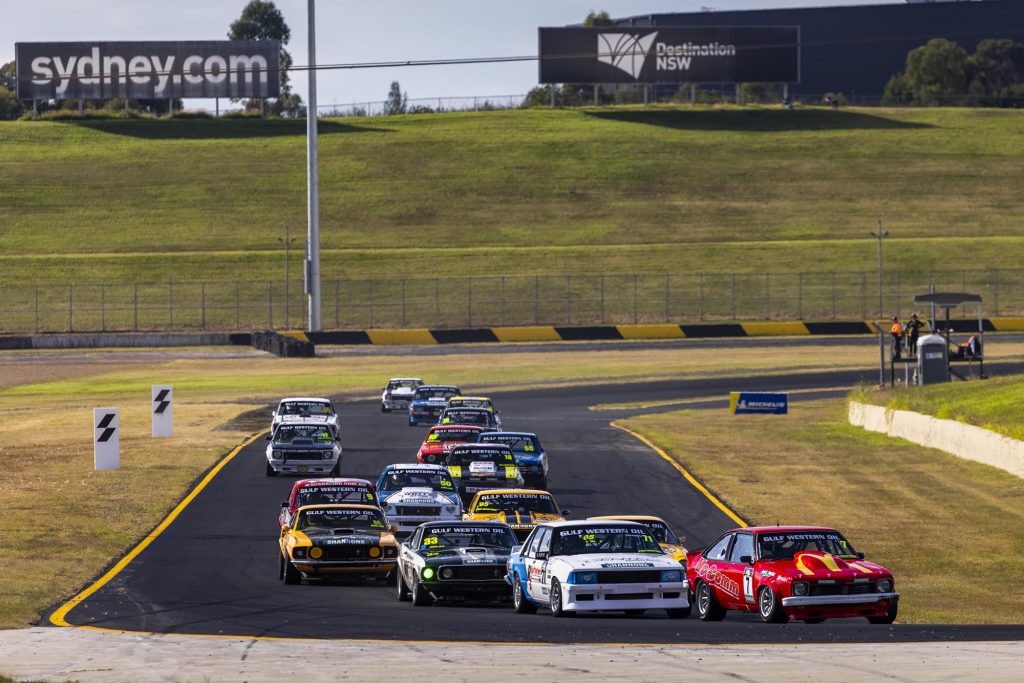 Driving the ex-Jason Gomersall Holden Torana A9X for the first time, the Sydneysider burst into an early lead in the race, but faced late pressure as he was hunted down by the six-time champion Bowe and a flying Adam Bressington.

Bowe was eighth at the end of the first lap but in customary style picked his way through the field to climb to second on the start of the final lap.

From there he chased Pollicina hard with the pair of Torana’s running side-by-side through Turn 8 in a last lap fight.

Bressington was close behind in third aboard his Whiteline Racing Camaro but neither could get past the steadfast Pollicina, who won in spectacular fashion.

Gerard McLeod finished fourth and Mark King a solid fifth in a strong day for the Camaro squad.